What is cloud computing?

Cloud computing is an IT paradigm which enables ubiquitous access to shared pools of resources such as networking, compute power, storage, applications, and services. For it to be completely ubiquitous all of these resources need to be accessible over the internet and configurable via an API.
The cloud allows companies to drastically cut on capital expenditure because they don’t have to buy their own network equipment, servers, and storage solutions anymore. Using the cloud’s business models you just pay for the resources that you actually use (pay as you go).

In the old world you had to do extensive research into the right equipment that would hopefully meet all of your demands. Then you had to order the hardware, which would take another month, and then someone had to install and configure the equipment. Provisioning a bunch of servers would easily take a few months.

Today, companies can provision a cloud server in just a few minutes and scale the amount of resources up and down as demand fluctuates. This kind of flexibility democratizes access to compute resources and allows anyone with the right idea to build it and scale it millions of users without spending a dime up-front.

This is where AWS comes in

AWS offers PaaS (platform as a service), IaaS (infrastructure as a service), serverless computing, and much more, with well over 70 different services. And that number is growing rapidly as well, with AWS now offering more than a thousand new services and features every year. Their annual re:Invent convention grew to over 60,000 people attending in 2019.

With all of this momentum, AWS is now a force to be reckoned with, while more and more companies are moving their infrastructure to AWS’ platform: from retailers to banks and from schools to media conglomerates.
On this massive platform, companies are able to let their imagination go wild, think of new business models and offer services to their customers they wouldn’t have dreamed of only a few years ago.

Because of the breadth of services AWS offers and the time it would take to tell you about all of them. Using VPC, EC2, RDS, and IAM we’re going to make a typical web application deployment as an example.

VPC is short for Virtual Private Cloud and allows you to build a virtualized private network inside of AWS complete with subnets, NAT gateways, VPN connections, routing tables, security groups and much more. Everything you expect to have inside of your own data centre is right there in AWS.
When you first enter the VPC dashboard at AWS, you will see some familiar terms like subnets and routing tables, other terms are not that clear to newcomers. Here’s a list of (some) things that might be not that familiar:

EC2 is short for Elastic Compute Cloud and offers a virtual machine in the cloud, but with a few tricks up its sleeve.
As with any virtual machine you can connect a virtual network interface to it, as well as some storage. What most virtual machines can’t do however, is auto-scaling: growing and shrinking your fleet of servers on-demand or completely automatically. EC2 has the unique ability that this is all built-in to the service.
Again, some things might sound familiar when you first have a look at the EC2 dashboard at AWS, but others might not. Here’s a rundown of some terms that you will come across:

Relational Database Service (RDS) makes it easy to set up, operate, and scale a relational database in the cloud. It provides cost-efficient and resizable capacity while automating time-consuming administration tasks such as hardware provisioning, database setup, patching and backups.
RDS supports multiple database engines like Amazon Aurora, MySQL, Microsoft SQL Server, PostgreSQL, MariaDB and Oracle. RDS also allows you to create clusters which will automatically failover if needed. A Bring Your Own License (BYOL) model is available for Microsoft SQL Server so you can re-use your existing licenses if you have any.

AWS Identity and Access Management (IAM) is a web service that helps you securely control access to AWS resources for your users. You use IAM to control who can use your AWS resources (authentication) and what resources they can use and in what ways (authorization).
Using IAM you can create granular access control policies so you, your coworkers, or resources within your AWS account, can only access the stuff they actually need.

When you combine IAM and EC2 you can assign a role to your instances which in return grans certain pre-defined access rights to the instance. This prevents you from having to store credentials on the EC2 instance itself.

Putting together all of the services we mentioned earlier you get this reference architecture: 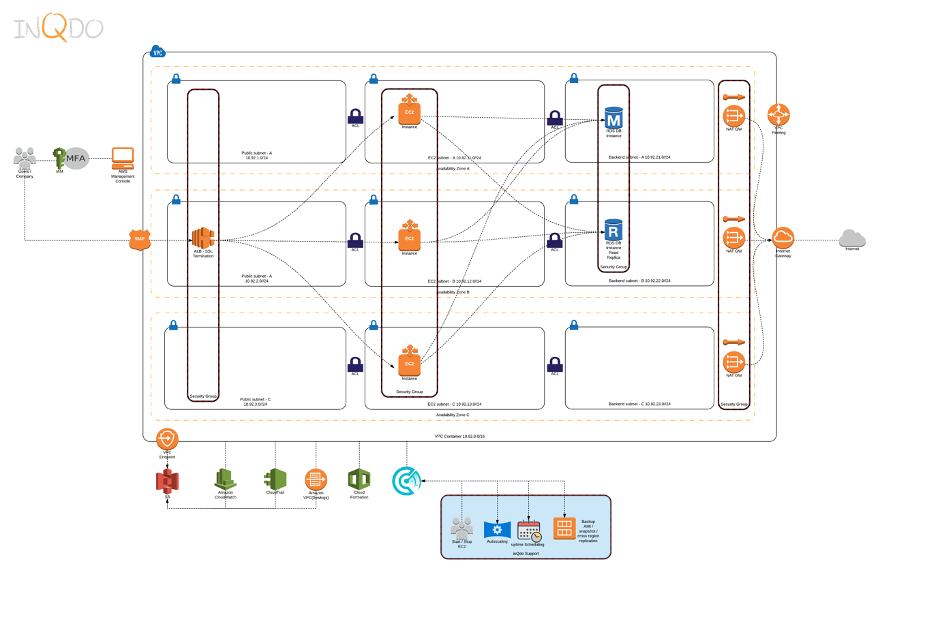 This reference architecture is often used within inQdo as a starting point to start designing the exact AWS architecture a client needs.
This reference architecture is well suited for a typical web application. Resilience is ensured by using autoscaling of the EC2 instances and creating a clustered RDS setup. As many AWS managed services as possible are used to reduce maintenance costs. Security is built right into the network design by leveraging security groups and ACL’s (access control lists) to only allow certain types of traffic on the network.

As you can see some other services are used like Amazon S3 for storing log files, CloudTrail for auditing, and our own product aewacs to manage snapshots, and uptime schedules of EC2 instances.

This reference architecture is often used within inQdo as a starting point to start designing the exact AWS architecture a client needs.

The future of the cloud

While we move more and more workloads to AWS and rework applications to have them integrate seamlessly with all of the services AWS offers, we have to wonder what’s next.

Cloud is already the new normal and widely adopted by companies of all sizes. The last few years have been about getting everyone on board, the next years will be about optimizing current workloads and abstracting away as much of the daily operations as possible. You can already see steps being made on that front by way of services like AWS Lambda, which allows you to run code without the need to manage servers.
All advancements will be shaped not by a single use-case but by many developments in fields like AI, IoT and Blockchain. The cloud is in a unique position to offer services to allow companies to innovate faster on these fronts.

This website uses cookies to improve your experience while you navigate through the website. Out of these cookies, the cookies that are categorized as necessary are stored on your browser as they are essential for the working of basic functionalities of the website. We also use third-party cookies that help us analyze and understand how you use this website. These cookies will be stored in your browser only with your consent. You also have the option to opt-out of these cookies. But opting out of some of these cookies may have an effect on your browsing experience.
Necessary Altijd ingeschakeld
Necessary cookies are absolutely essential for the website to function properly. This category only includes cookies that ensures basic functionalities and security features of the website. These cookies do not store any personal information.
Non-necessary
Any cookies that may not be particularly necessary for the website to function and is used specifically to collect user personal data via analytics, ads, other embedded contents are termed as non-necessary cookies. It is mandatory to procure user consent prior to running these cookies on your website.
OPSLAAN & ACCEPTEREN